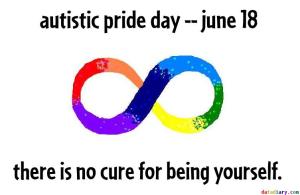 Today is the 9th annual Autistic Pride Day and the first since I’ve been ‘officially’ on the autistic spectrum. Of course I’ve been acutely aware that I was different from other people since childhood, and known that I was definitely neurodivergent since diagnosed as dyspraxic in early 2007.

Pride is the opposite of shame, and that’s what pride events are about; not being ashamed of who we are. Autism is pervasive, it affects how we perceive, think about and interact with the world, and so it’s an inseparable part of who we are as autistic people. There are a lot of negative things written and said about autism so it’s important for us to push back and say that we like being who we are despite of all the challenges.

I’ve already written here about how there are positives to being autistic but I also want to say a little more about why I chose to be open about my diagnosis rather than keep it as something personal that I only shared with family, close friends, and employers or other professionals on a need to know basis.

Firstly, being open that I’m autistic makes me make sense to other people. It means that friends who’ve struggled to connect with me or assumed that my ‘mixed signals’ meant that I probably disliked them realise that there’s maybe something else going on. It means that people who previously saw me as ‘socially careless’ gain some insight into how hard I’m actually working to be ‘socially correct’ and considerate. It means that people who always saw me as ‘difficult’ might understand how stressful the wrong type of sensory environment can be for me. It means that people who might have been indirect and implicit in their communication might think twice about wording things in a more direct and explicit way. And it means that when I say that I don’t understand something, people are more likely to stop and take the time to reword it, and less likely to assume I’m joking or ridicule me.

Secondly, it means that non-autistic people who know me are aware that they know an autistic person, and that there’s more to the autistic spectrum than the stereotypes and media depictions they’ve probably learned. It means that when I write about how I experience executive function, emotional awareness, sensory overload, social interaction etc, these aren’t just seen as my personal foibles but as there being more to autism than they might have understood.

And perhaps most importantly of all, autism is a spectrum where each of us can have wildly different traits; different strengths, different challenges, different coping mechanisms and different personalities. So being openly autistic means that there’s one more example of autism visible for other ‘undiscovered’ autistic people to recognise themselves in.

I’m out and open for those people who are like I was from ages 12 to 32; aware of being different, aware of so many challenges but not aware of exactly why, not having the words to search for to find all the help and insight that’s other there. People who are working it out the hard way, struggling on their own. Those who might be aware of the stereotypes, but not of the true diversity.

As an extraverted autistic person who makes friends but struggles maintaining friendships, who’s expressive and ‘active but odd’, has poor emotional awareness but strong verbal skills, difficulty dealing with stress and terrible executive function but many coping strategies and successes, I wanted to share my experiences, share what it looks like to be me. To add to the diversity of autistic voices out there, so hopefully even one more person like me can find a word for who they are, and realise that it’s nothing to be ashamed of. 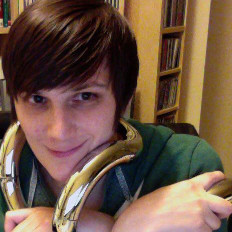